In the Welcome to ImmyBot! email, click Setup ImmyBot 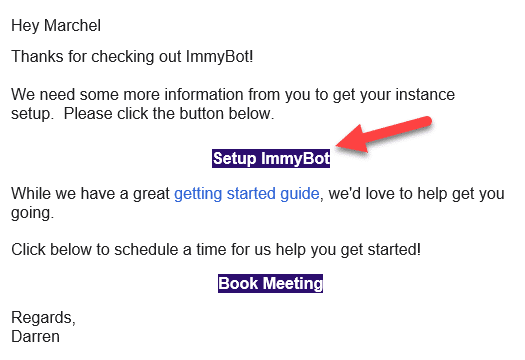 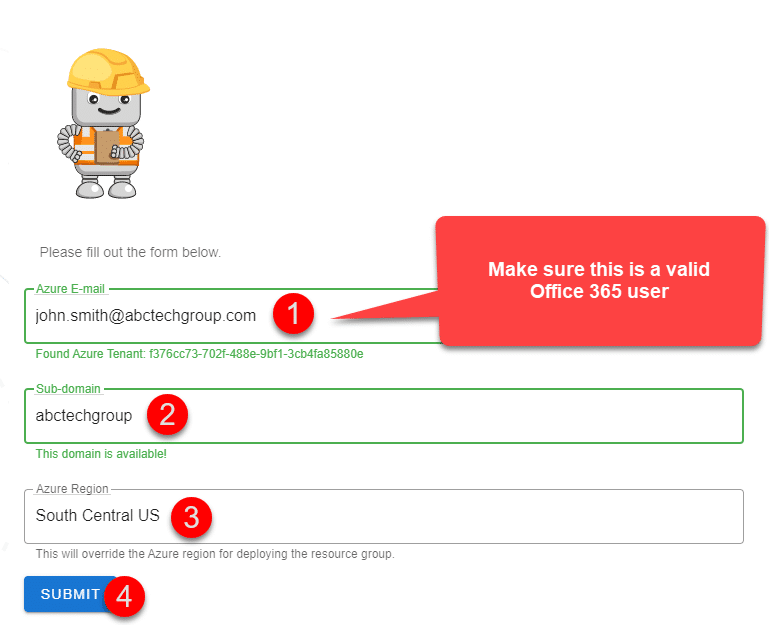 Do something else for 6 minutes. Or 9 minutes if you are in Australia. It takes longer there for some reason.

You’ll receive this email when your instance is ready: 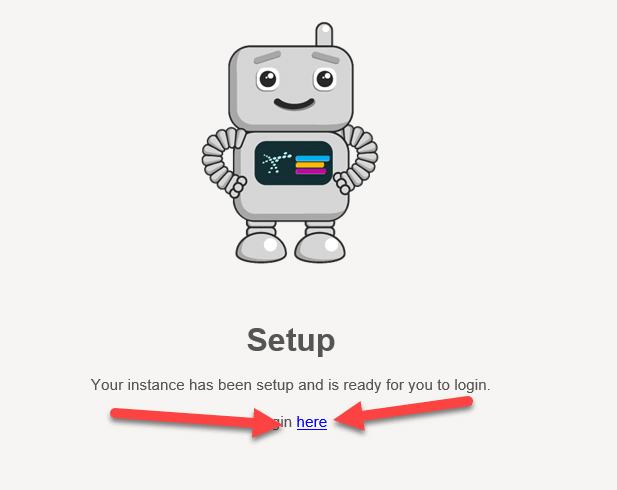 In this example we will tell ImmyBot that all computers you setup should get Adobe Reader.

We do this by making a Deployment that assigns Adobe Reader to all Workstations and Portable Devices. (Note, we use the term Portable Devices instead of laptops to be inclusive of Windows tablets. ImmyBot is not an MDM and does not support phones)

Windows Sandbox is a fast loading disposable container in Windows that loses all settings when shutdown or restarted. It is very convenient for testing software deployments.

If you haven't used Windows Sandbox before, you can enable it by opening Windows PowerShell as Admin and running the following command: 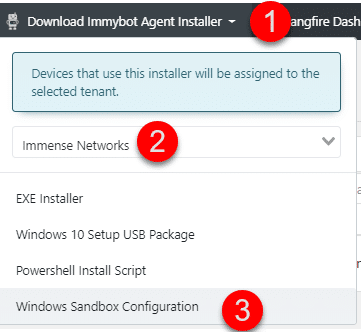 Wait for ImmyBot Agent to install 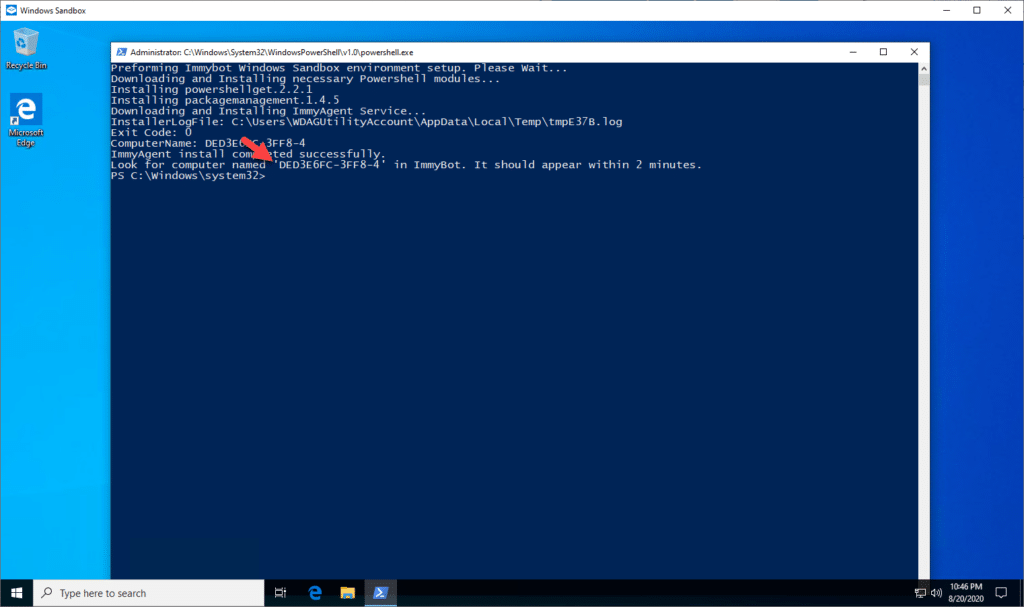 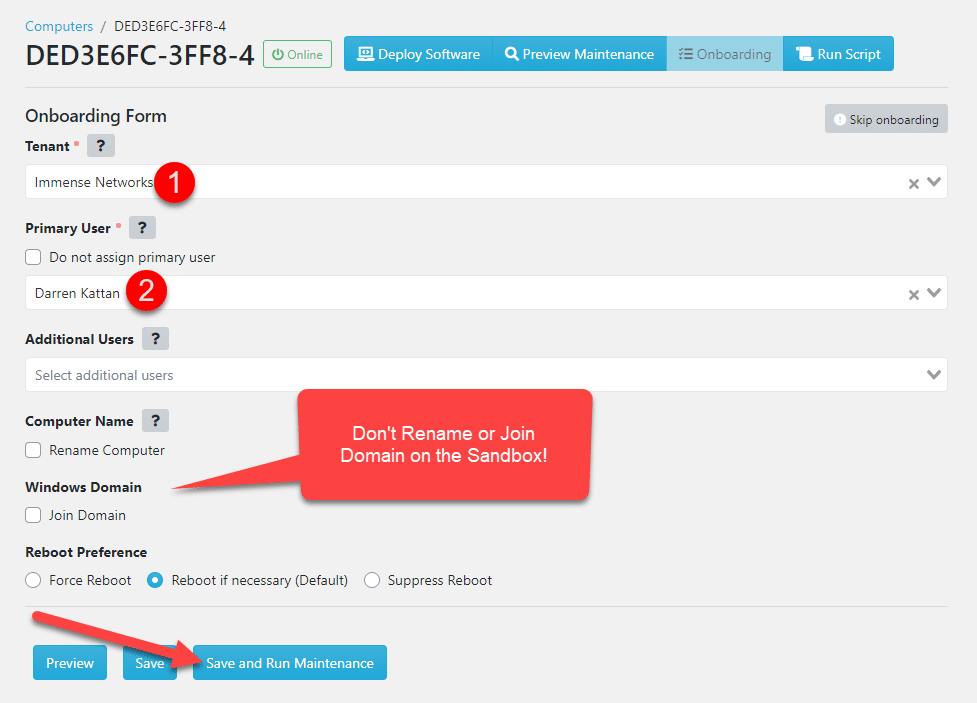 This will create a Maintenance Session that will discover that Adobe Reader should be installed on the machine, check if it is already installed, install Chocolatey, then use Chocolatey to install Adobe Reader.

If you haven't consented to allow Immy to read your AzureAD, you'll need to know the users' Object ID:

Second, Make the Person a user

(Optional) Make that User an Admin.

Important If you are just getting into ImmyBot, making Deployments is where you should start.

Note: You won't see the word "Assignment" in the user interface anywhere, but we plan to re-rename "Deployment" back to "Assignment" it in a future release.

A deployment is a rule that assigns Software or Maintenance Tasks (Collectively known as "Maintenance Items") to a Target.

This is the first Deployment I make in most instances 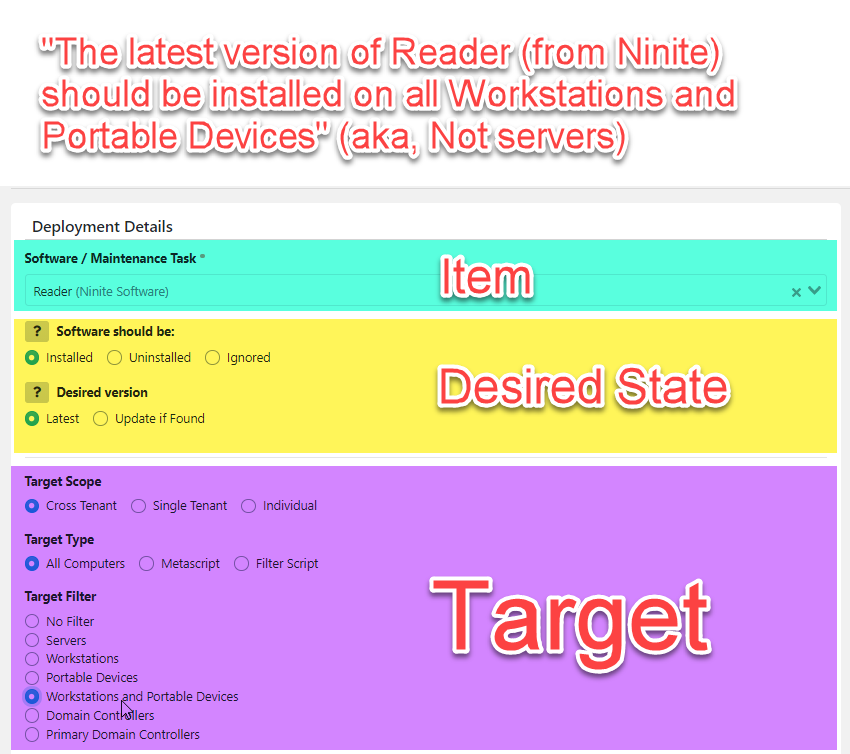 Deployments are conceptually similar to Group Policies in that they assign settings to a group of users or computers.

IF YOU ARE JUST GETTING START WITH IMMYBOT, DO NOT BE AFRAID TO SAVE YOUR DEPLOYMENTS. THEY DO NOT APPLY AUTOMATICALLY.

If you DO want your Deployments to be applied automatically, you need to create a Schedule.

Let's say you have a customer "Contoso" that uses Adobe Acrobat instead of Adobe Reader, and you would like that to be installed instead.

First, create a Deployment that sets the desired state of Adobe Reader to Uninstalled for Contoso 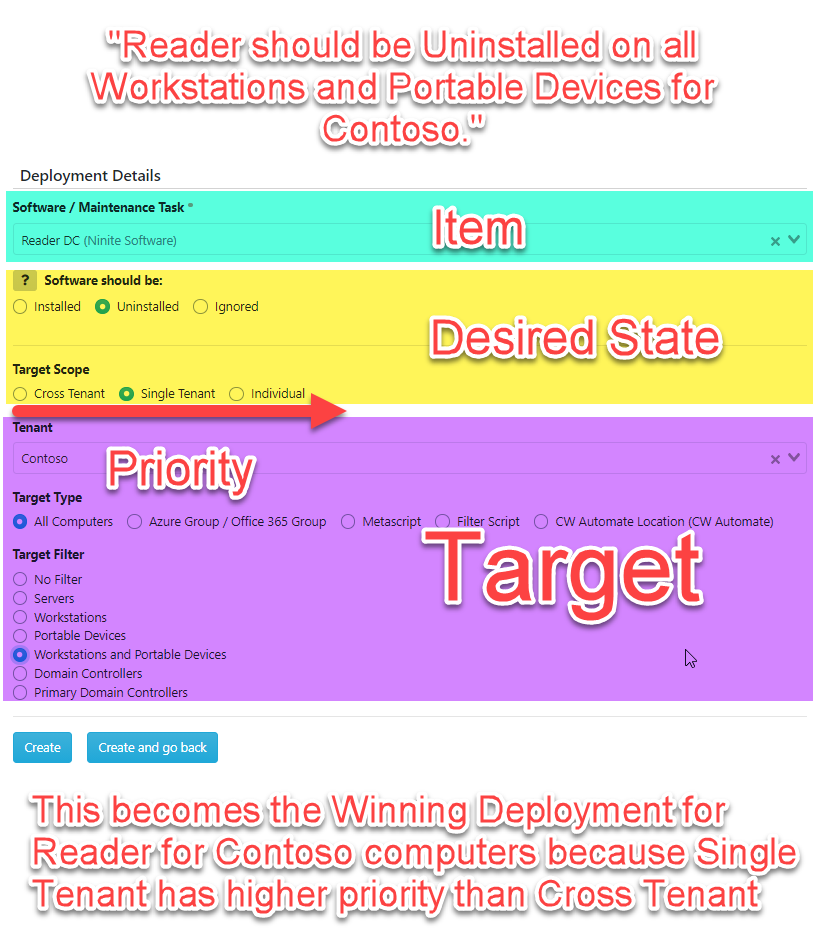 Then, create a Deployment that Installs Adobe Acrobat for their computers 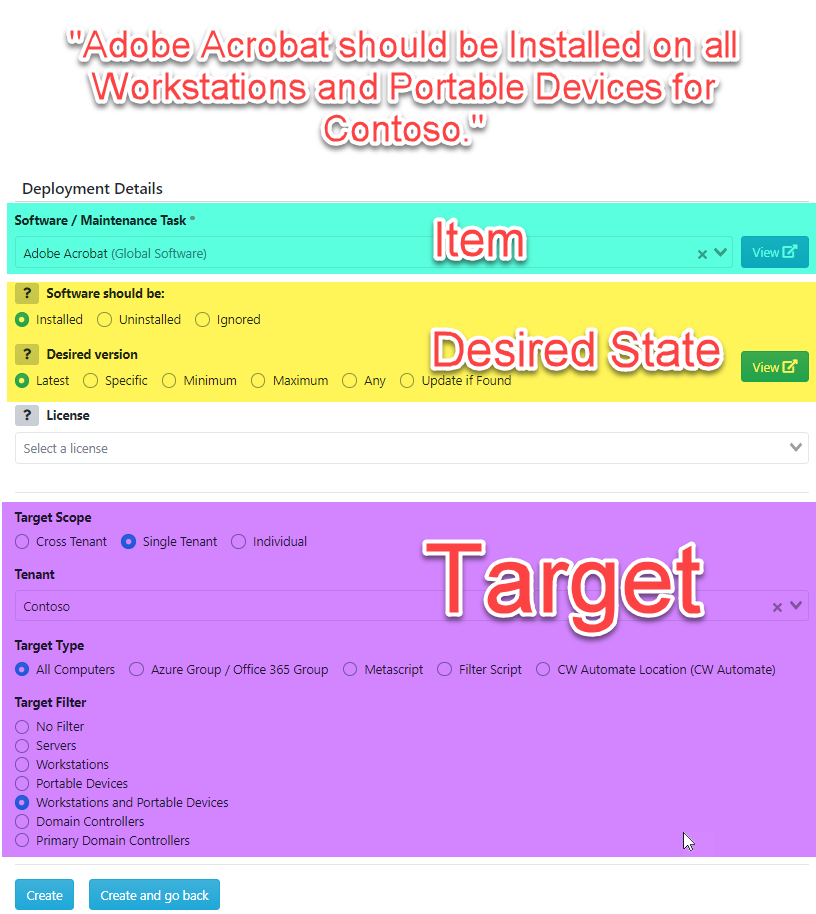 ImmyBot's ability to resolve Targets to a group of computers is perhaps its most powerful feature.

For example, you can select a Group of users from AzureAD (which includes on-prem synced groups, and Teams) and ImmyBot will automatically resolve that to the list of computers in use by the people in that group.

This is particularly useful for security software, help desk portals, or anything else in your stack that you may only want to be installed for customers that are paying you for it.

Conversely, you could use this feature remove your stack for customers you are offboarding. Simply create an "Offboarding" product in your PSA, and create a deployment for each of the pieces of software you would like removed setting the desired state to Uninstalled for all customers with the "Offboarding" product on their agreement. Note: ImmyBot even honors the date range on additions, making scheduled offboarding easier if say the customer wants your software removed on the last day of the month.

A Maintenance Session is conceptually similar to running gpupdate /force

In other systems, different types of maintenance happen on their own schedule. Windows Updates may run on Tuesday night, but Third Party updates may run on Wednesday night, and auto-fix tasks may run whenever an alert is fired for a failed monitor, which has its own polling interval.

By forcing all automation to happen in a sequential set of actions we call a Maintenance Session, we can deliver predictability not only as to what changes will be made, but also when.

This also provides a cohesive mechanism for setting up a new computer. At best in traditional RMMs you can assign Monitors that detect the absence of required software and run Install scripts when they are missing, but this doesn't scale as pre-requisites and exclusions are required.

Imagine if Group Policy could reliably deploy any type of software, and gpupdate /force worked reliably off-net, and when you ran it, it gave you real-time feedback about exactly what it was doing. Also imagine that it could optionally notify the end user before and after with a branded email telling them exactly what is being done, that optionally lets them cancel.

You can view Maintenance Sessions for all computers under Computers->Sessions

Or, you can view Maintenance Sessions for a specific Computer under the Sessions tab for that Computer

This is a read-only process, and typically done while the user is active. This is so ImmyBot can notify the user of changes that will occur later during the Execution Stage. By doing this during the day, and scheduling Execution for later, we are giving the end user the best possible chance to be aware of the upcoming maintenance, Postponing if you allow. The Postpone feature is very popular among engineers that do may need to leave renderings and analysis tasks running overnight. 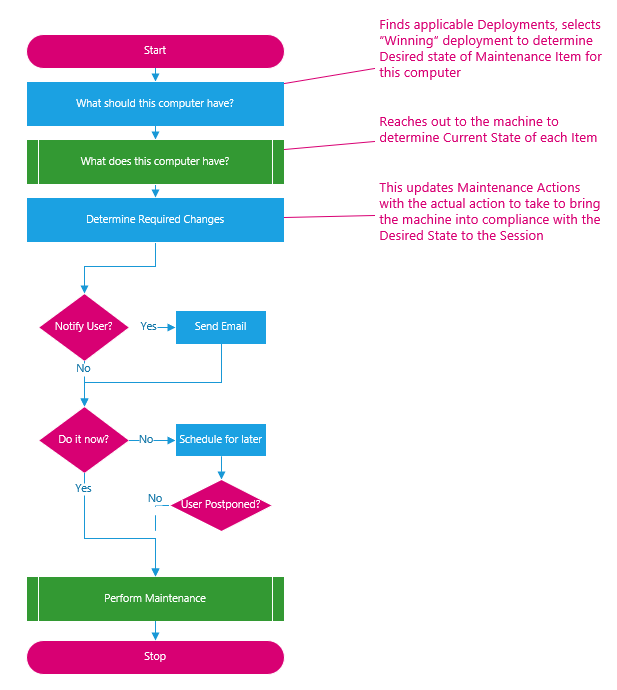 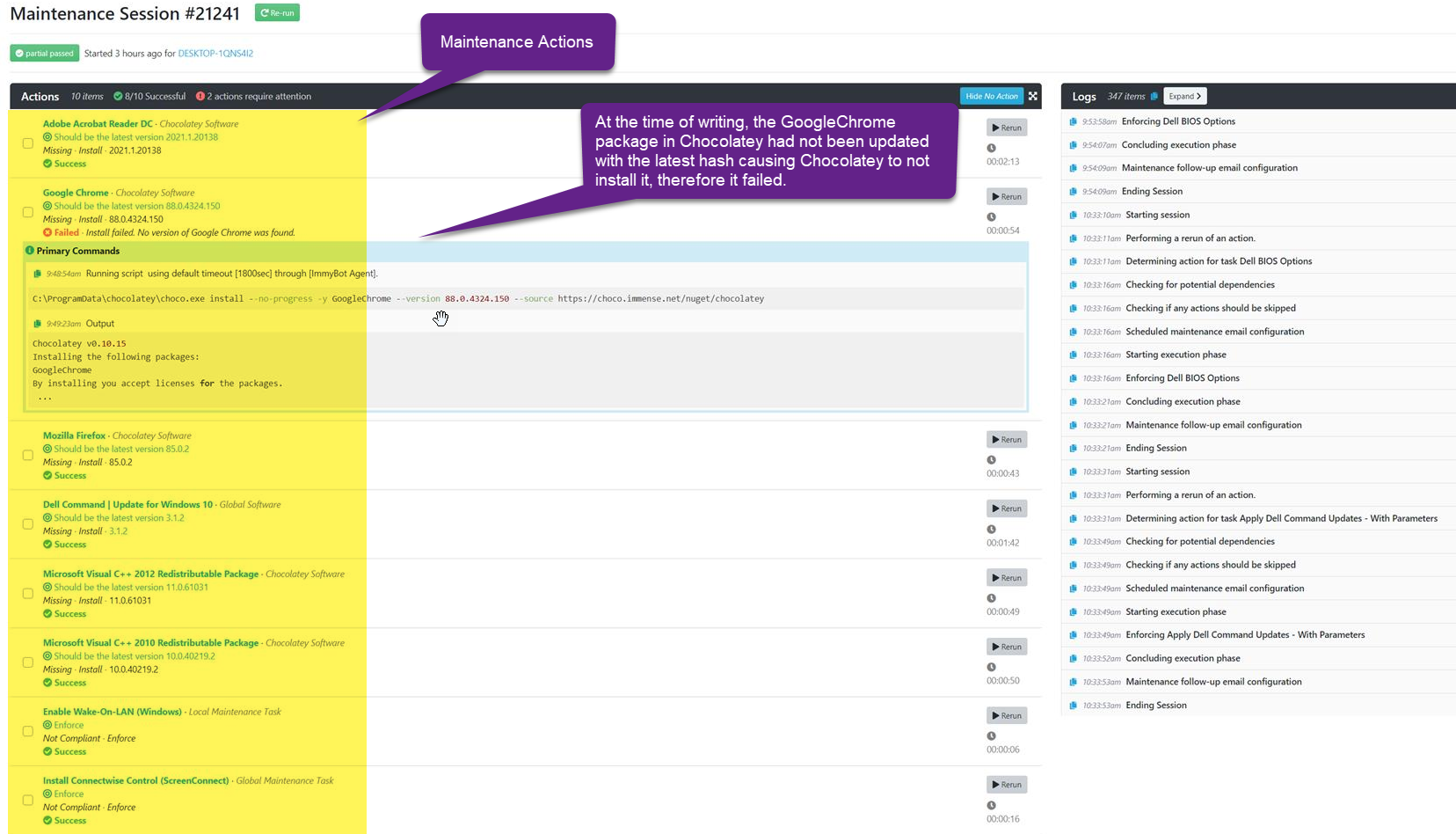 Software, in the context of ImmyBot refers to Software objects in My Software or Global Software.

My Software - Initially empty. When you upload your own software to ImmyBot, it goes into My Software

At the bare minimum, Software requires a Detection Method. Software can have many Software Versions.

This is a VERY powerful, and critically underrated feature in ImmyBot. ImmyBot resolves dependencies recursively, with built-in circular reference detection.

Common uses for Pre-Requisites include 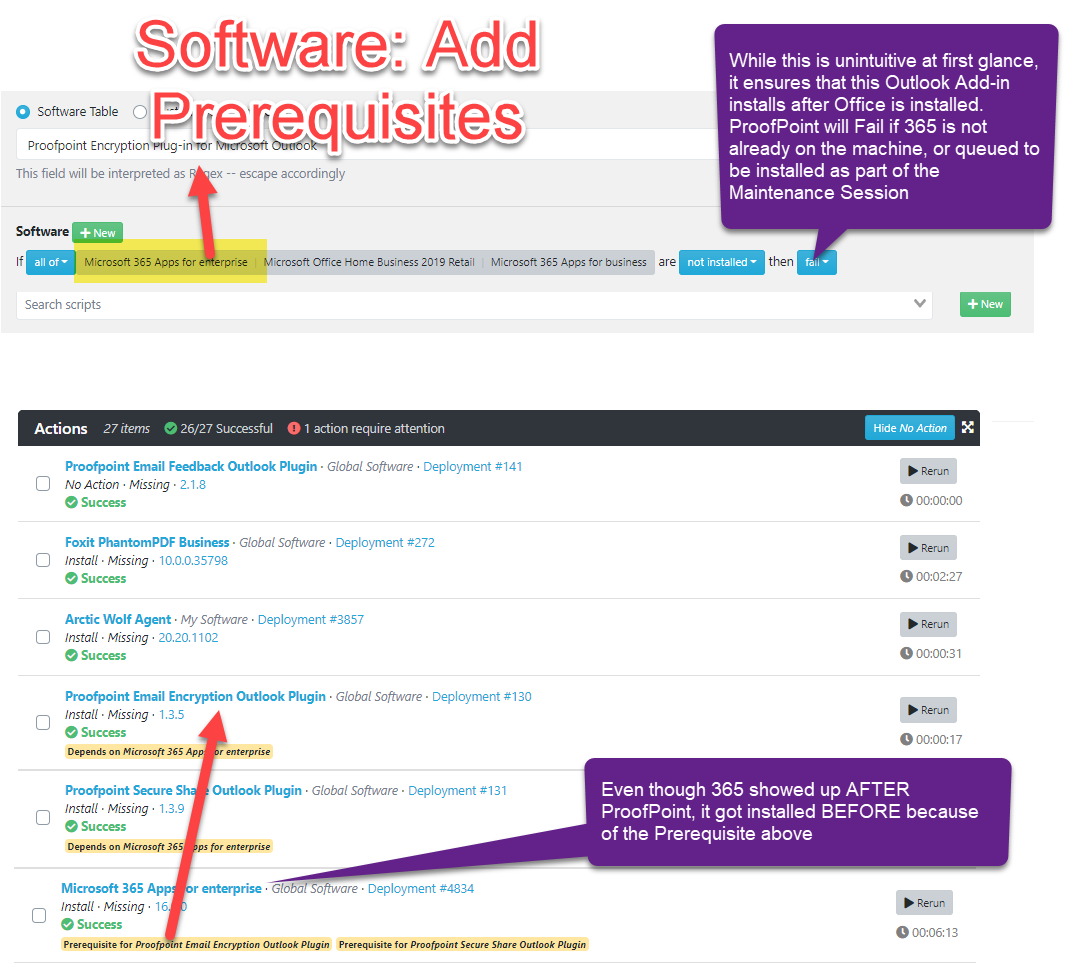 A Detection Method is required in order to know whether or not a piece of Software is installed on a machine.

For Software, the detection method must returns the version of the software installed on the machine, if any.

For Maintenance Tasks, the Detection Method is the "test" mechanism, which must return true or false to indicate whether or not the machine is in compliance.

Runs the "test" script which should return true or false. It can output whatever it wants, but the last output should be boolean.

Runs the "get" script, which can return anything. Useful for collecting data like Bitlocker Keys, Quickbooks Licenses, or any other piece of information you are interested in.

From the above diagrams, you can see that scripts are the building blocks for higher level objects like Software and Maintenance Tasks.

Run as a service on the machine

Will attempt to run as the logged on user

Runs in the ImmyBot backend, and can spawn code on the system by using Invoke-ImmyCommand

Runs in the ImmyBot backend, but intended to be run against a Tenant (perhaps for the purpose of getting or setting some setting in 365/Azure or some other system with an API). These are used exclusively in Maintenance Tasks targetting "Tenants". 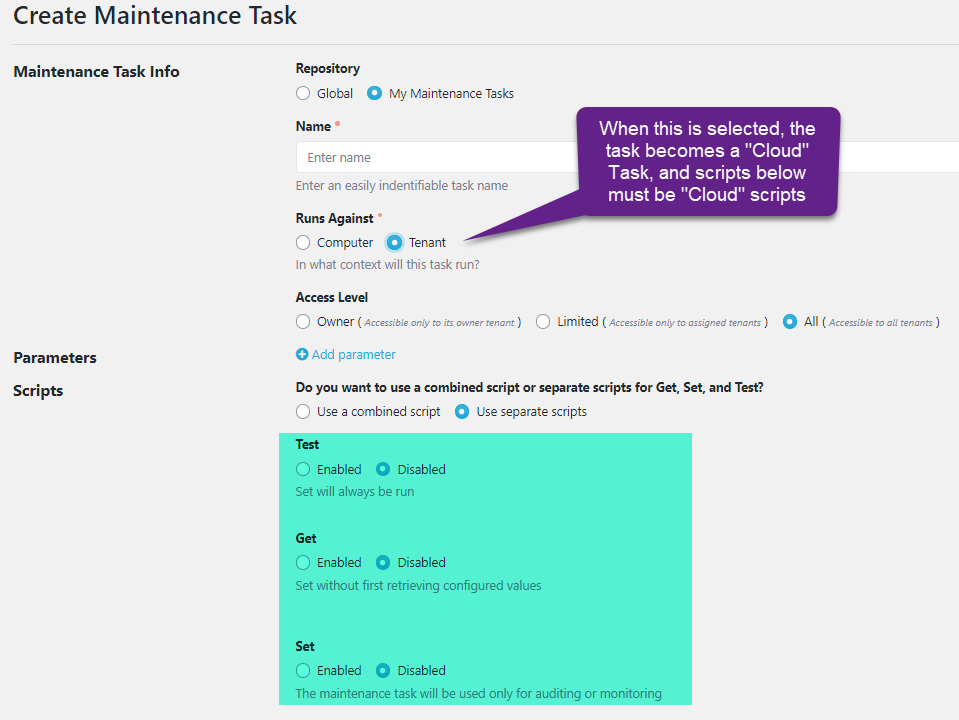 Used to run maintenance periodically on machines. Can optionally be limited to a single Maintenance Item.

To ImmyBot an RMM is a system that provides a list of computers, and a mechanism to run PowerShell scripts on them.

To avoid having to deploy the ImmyAgent to existing machines, ImmyBot optionally integrates with RMMs like ConnectWise Automate and ConnectWise Control and uses their agents instead. These systems are not as performant as the ImmyAgent, but can suppliment ImmyBot functionality.

For example, if you add an RMM Link for ConnectWise Control, you can open a remote session to the computer directly within ImmyBot:

You can even add multiple RMMs of the same type, which is often useful in merger and acquisition scenarios. You may choose to use ImmyBot as your single pane of glass to manage both, or simply let ImmyBot be a neutral third party for facilitating the consolidation of RMM agents to the parent company's RMM.

Because the same computer often exists in multiple RMMs (Like how CW Automate typically installs CW Control Automatically), ImmyBot prevents duplicates by identifying the computer by a unique id. We DO NOT use MAC Address! This unique id persists even if you wipe and reload the machine.

When a new machine is detected, it first goes to New Computers->Actively Identifying 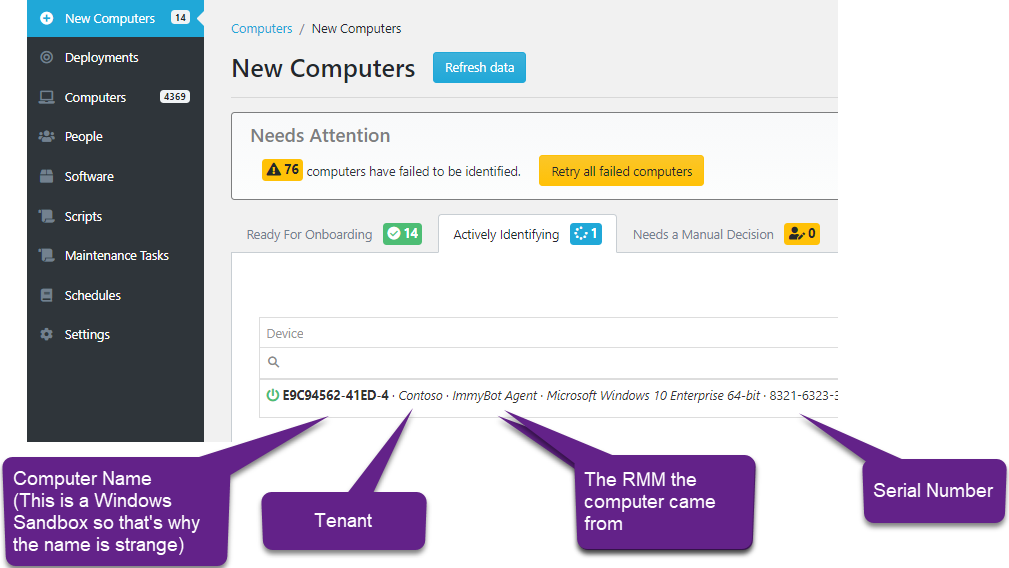 It uses the following script to collect the UUID from the machine:

This value is static even if you wipe and reload the machine, although we have VERY rarely seen this value change following a BIOS upgrade or due to a mainboard fault. We chose this value instead of Mac Address or Hard Drive serial number because of issues other systems have with USB Ethernet cables and hard drive replacement. We did not use serialnumber because we learned that many computers do not have serial numbers.

In practice, this value works almost too well. Machines you just wiped and expect to find in New Computers, are often associated to their pre-wiped computer objects. To find them, you often have to search for the serial number of the computer in the Computer List. In 0.40.1 we began using the Windows OfflineInstallationID value to identify when an existing computer has been wiped so we can set its status to "Needs Onboarding" which causes it to show up under New Computers as expected.

If it is a machine ImmyBot has seen before, it will be associated to the existing Computer, and you will find a new entry under the Computer's Agents tab. Under the hood we call these entries "RmmComputers".

Computers can have one or more RmmComputers(Agents). You can think of these as logical "pathways" to the computer. We only need one to be online to function. 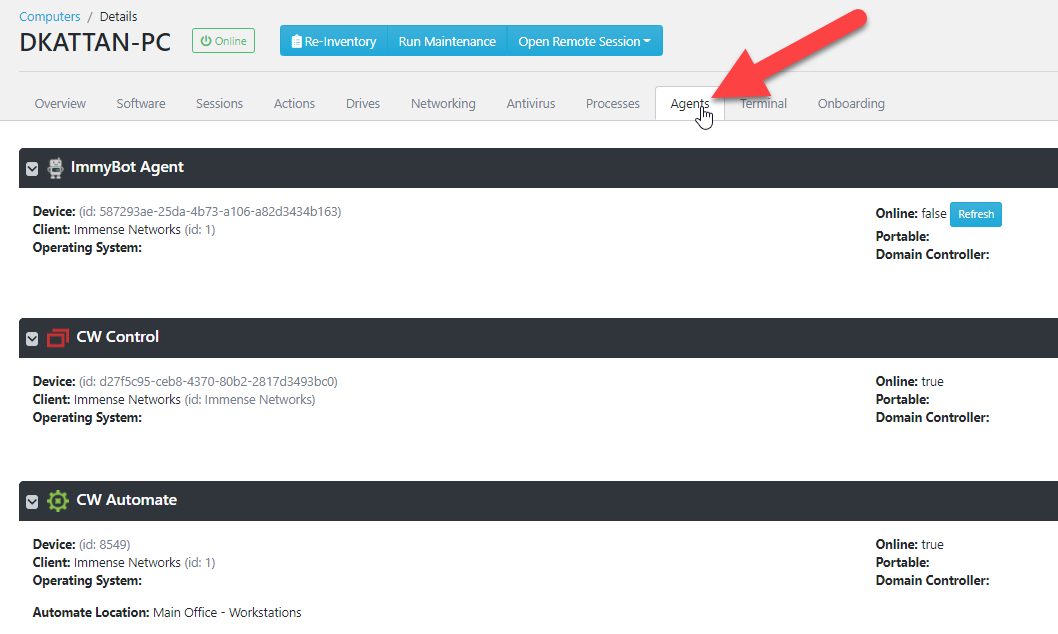 Often when an RMM Agent gets re-installed, it will get a new id in the RMM (ComputerId in Automate, SessionID in Control). ImmyBot will recognize that it is the same computer, but due to the fact that virtualization technologies and hard drive cloning can lead to the same scenario, we require you to tell us whether we should overwrite the existing RmmComputer, or keep both. 99% of the time you will click "Overwrite Existing". If the machine was in fact cloned, you would click Keep Both, in which case Immy shims the duplicate UUID with its own to prevent collisions.

The most common causes of identification failure are an overloaded or unresponsive RMM, or the machine has broken WMI, preventing us from retrieving the uniqueid of the machine. You may retry identification on one or all of the failed computers once these conditions are resolved.

In ImmyBot, Onboarding is the first Maintenance Session run against a machine. You may enable or disable Onboarding for a given Tenant or entirely under Settings->Preferences. When disabled, computers do not get put into New Computers, and go directly into the Computer list. This is useful if you have a customer that sets up their own computers outside of ImmyBot, as it prevents their machines from clogging up the New Computers area.

These are your Customers. We recommend syncing Tenants from CW Automate or Azure.

ImmyBot periodically runs whoami /upn on all computers and keeps a rolling list of the last 10 UPNs. It assigns the Primary User of the computer to the "Person" (Synced from Azure) with the matching UPN.

For environments without AzureAD, ImmyBot will lookup the UPN of the Person from a Domain Controller in the computer's Tenant